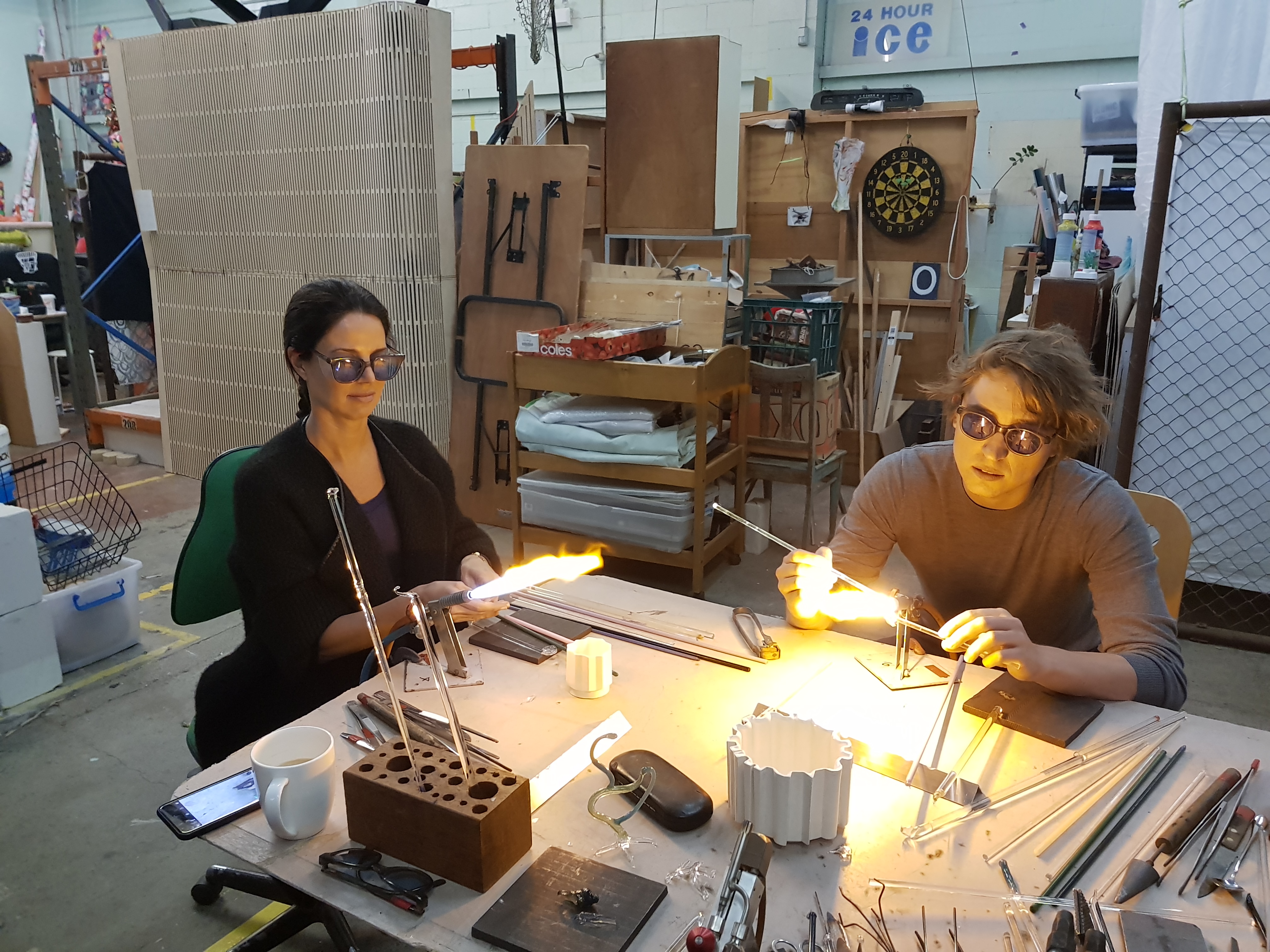 Mark Eliott is a Sydney-based glass artist with a specialisation in flame-work whose glass artworks are stories inspired by synaesthesia, a perceptual phenomenon that relates colours to numerals and music. We spoke to him to get an idea of his work and what students can expect at his glassblowing workshop.

Can you tell me a bit about your practice?

My glass art practice spans biological representation, sculptural abstraction, mythology and glass-animation. I write and illustrate stories in glass: drawing on synaesthesia as an influence including visual music, coloured alphabet and numerals.

Since completing a Masters of Visual Arts, Studio arts and a diploma in Jazz studies at Sydney, I have begun a PHD in glass at the Australian National University.  I also teach Flame-work at Canberra Glassworks and do interactive demonstrations. I live with my family in Sydney, play music and purchase carbon credits to help offset my energy use.

What tradition of glass making is the most influential for you as an artist? E.g. Venetian, Czech, etc?

My artistic influences span many genres and media from the early 20th century Russian painter Marc Chagall to 1960s psychedelic music and contemporary street art however most of my techniques come from the scientific glassblowing tradition known as lamp-work (now more often called Flame-work).  My first glass influences were my teacher in Sydney: Peter Minson and Tasmanian glass artist Richard Clements. Like most flame-workers I am deeply influenced by the Blaschkas a father and son team from Bohemia (Czech), working in Germany from the mid19th to early 20th century whose glass biological specimens wowed visitors to the world's natural history museums. Venetian glass artists such as Lucio Bubacco also influence me.

One of my favourite artists is Carmen Lozar from the US where most of the glass innovation in recent decades has been happening. Her work appeals to my interest in story telling.  There is also much influential work coming out of New Zealand - the land of my birth as well as countries like Japan and South Korea.

Tell us about one of your works.

Pictured is a work titled: Apparatus for the Extraction of Cloud Essence . This was made in 2016 for an exhibition titled History repeats at Craft ACT in which I was invited to participate by curator Mel George. Each artist was asked to respond to a piece from the worlds biggest glass museum The Corning, in New York.  I was given the Spanish Trick Glass: a strange and whimsical object from the 17th century. This immediately became repurposed - weaving itself into a story I was writing called Essence of Cloud about Professor McFoggarty: a mad 19th century naturalist who attempts to extract the ‘essence of clouds’ via hot air balloon.  This work features the Professors 16th century Spanish alchemist ancestor Sergio Foggartino extracting the essence on a mountaintop whilst a slightly bemused Goddess of the Clouds looks on.

This work is the start of a series and was recently purchased by the Corning Glass Museum.

What is your favourite thing about working with glass?

To me, glass is an addictive substance. We think of it as hard and brittle but working with it hot - in the pliable state, is like a combination of chewing toffee and sculpting liquid gemstone.

Over time I have developed a phenomenological relationship with the materiality, processes of glass art, which almost amounts to a kind of cultural identity.

When doing public demonstrations, I feel I am playing a role a bit like the carnival magician. When teaching, I enjoy the sense of discovery often experienced by students encountering the medium for the first time.

What can people expect if they sign up to the glassblowing workshop?

Workshop participants will embark on a creative journey of introduction to a medium that is very unique and essentially good fun.  I like to begin with a playful, improvisational attitude - introducing the more structural and technical aspects as we go along. You will learn basic techniques for joining, stretching, sculpting and blowing glass whilst making a variety of small clear and coloured glass pieces to take home such as animals, wearable objects, branching forms and vessels.


Learn how to sculpt and blow a variety of glass objects for decoration or utility in the flame with Mark!

Glassblowing and Sculpting on the Flame: Workshop with Mark Eliott Glass Studio